Employing a disabled person for the first time

My name’s Emma, I’m the Head of Marketing for a software company based in Coventry.

To my knowledge, we’d never employed a disabled person until a very lovely young man called Charles interviewed for a role within my team.

Interviewing a blind person for a job role

Charles is 24 and blind. When he arrived for the interview, I didn’t know he had a disability. So when I opened the door, I was pleasantly surprised to see, not only Charles, but his lovely golden retriever, Carlo, guiding him into the interview.

I recall at one point in the interview, Charles said, "should I have told you that I was blind on my CV?” I said no. You don’t need to disclose that information, because if you can do the job your CV sets out to do, then that’s all I care about.
We then actually had quite an open and honest conversation about his disability, after Charles chose to bring it up. Charles explained that he had just ten per cent sight and talked through how he would work with computer screens that magnify text, and how he uses other assistive technology to support him.

Knowing that it would be quite an intense, computer-based role, I admit I had my concerns for Charles’ health and how - as a potential employer - I’d make sure it was all going to be OK for him. But talking to Charles and seeing how confident he was, I was sure we could offer him the support he needed. In my mind, there was no indication that Charles wouldn’t be able to do the job.

As I got to know Charles during the interview, he was very honest about how many knock-backs he’d had and how many interviews he’d been to where they’d dismissed him straight away without even giving him a chance.

Charles has since told me that through the support he received from Scope’s Support To Work employment support programme, he’d been given some great advice on interview techniques, and that advice had given him more confidence in approaching the interview he had with me.

Throughout the interview, I definitely had an emotional connection to Charles as a person, as well as what I knew he could bring to my team. 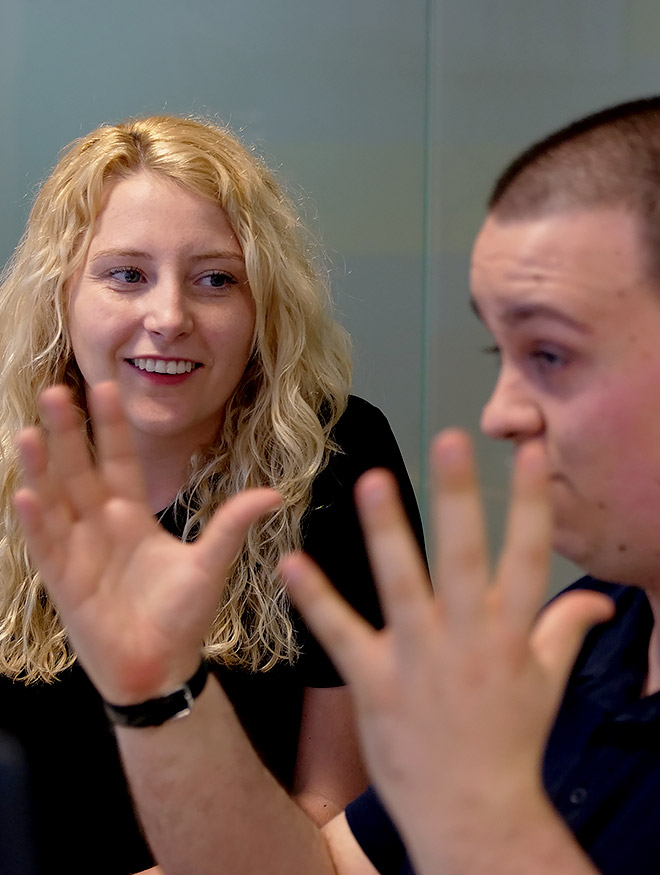 Research into supporting a blind person in the workplace

After the interview with Charles, I decided to do my own research. I spoke to someone I knew who worked with and trained guide dogs. I found out as much as I could about working with blind people and getting a better understanding about the guide dog side of things. I got advice on things I might need to consider from a technical, working point of view too.

It wasn’t until I got it all signed off with my CEO, that I then called Charles and offered him the job.

I then spoke about Charles’ needs with a contact he gave me at Access To Work (a scheme the Department Of Work and Pensions offers to support disabled people into work) and they emailed me everything I needed to know. I then just ordered the assistive technology Charles required to help him do his job. 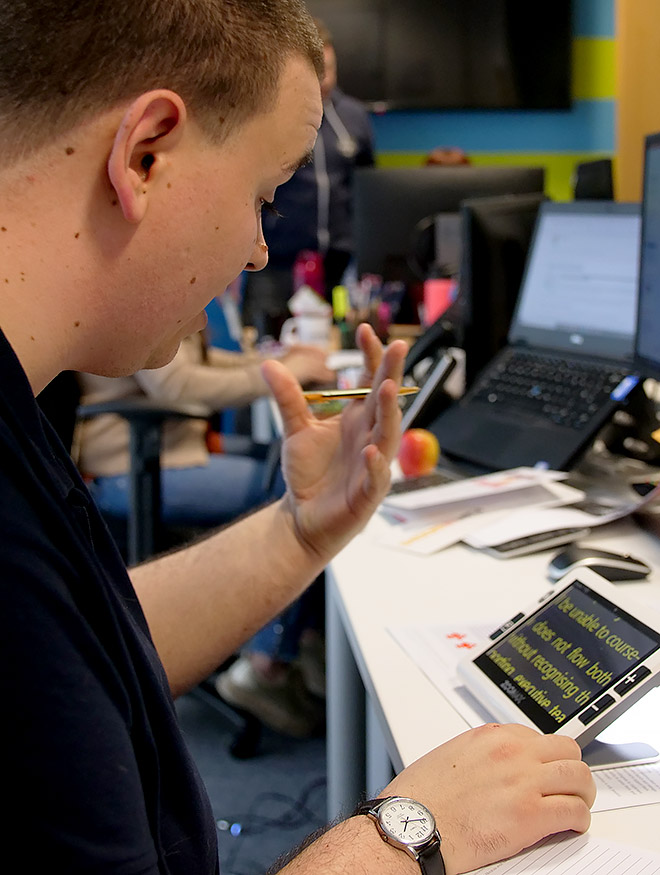 Concerns as an employer about hiring disabled people

I can imagine many employers might be worried about hiring a disabled person. For me, I was admittedly a little concerned about having a guide dog in the building, because one colleague in our open-plan office does have an allergy. But we simply separated the office so the marketing team could be in a different area, and it’s not been a problem.

The positive effect of hiring a disabled person

Everyone was really excited about the thought of having somebody visually impaired working with us. As soon as they met Charles, they realised why I’d given him the job. Colleagues often tell me it was a really smart recruitment choice and they all have a lot of time and interest in Charles as a person, and his capabilities within the organisation. 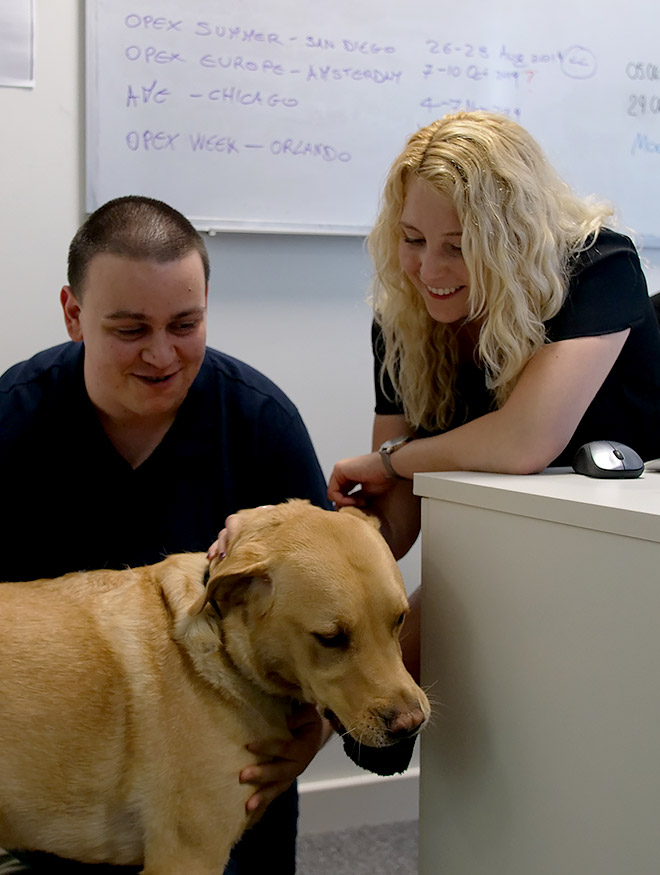 Why educating employers and colleagues about disability is really important

I think people can be judgemental and assumptive that a visually impaired person, for example, might not be as capable as somebody with full visibility.

I think it’s a shame really, that the label ‘disabled’ can cause employers to worry. I don’t think it’s that anyone is being mean or likes being difficult - I think it’s purely that many employers simply don’t know how to deal with the situation.

I think educating people is really important. And Charles has taken such a proactive role in helping the rest of the organisation understand his needs.

Just under a month into his role, Charles organised a training session around his disability. He had the fullest room of any training session we’ve ever run. In fact, we had to open the second room because everybody wanted to hear from him.

My colleagues wanted to find out about Charles and his guide dog Carlo, and listen to Charles’ tips and advice on how to work with a disabled person. All my colleagues were interested to work out what they should or shouldn’t do when it came to working with Charles and Carlo.

Watching that training session gave me goose-bumps. I just thought, ‘wow, we are a really great team, a really great culture’. Everybody made Charles feel so accepted, rather than shying away from the situation. The fact that many colleagues don’t even have to be involved with my team - as we’re currently away from the rest of the office in preparation for moving to a bigger location - is just a testament to how much people cared.

In that training session, Charles explained how he used a computer, and talked about how it’s handy when he’s not in direct light, because it’s really hard for his eyes. He also explained how part of his eye was missing, which was really useful and interesting to know.

Advice to other employers concerned about hiring a disabled person

My advice for employers concerned about hiring a disabled person, would be to treat disabled people the same as anyone else. You should conduct the interview in the same way and treat that person the same. Just listen, understand and ask questions.

Don’t judge a book by its cover. It could be very easy to do that, and to switch off when you meet someone who you can’t immediately see how it could work. It’s easy to jump to conclusions and make assumptions, and I think you should never do that.

Charles can do everything he needs to do, he just has to have those reasonable adjustments in place - and we’ve made those and it’s working so well for him.

Charles is a massive asset to my organisation and I think there’s a new feeling of community in the workplace, because of this decision. It’s really nice to know we didn’t turn away someone with such potential.

It’s actually not hard to do a bit of research. And if you’re too busy, then get support of someone who can help explain things to you. I spoke to a few people and they gave me everything I needed. It was easy to understand and it’s a decision I’ve never regretted.

A great place to start is Scope and Virgin Media's Work With Me campaign website, where there are some great resources for employers who can also pledge to be a more inclusive workplace for disabled people.

I think Charles has had a really positive effect on all my colleagues. He has certainly changed my outlook.

Charles is so smart and so capable, and there must be other people out there who are the same but not getting a look-in and aren’t getting a chance.

A colleague in my sales team recently told me how touched they were by Charles’ story. Charles has definitely opened people’s minds to the fact that everyone is capable. 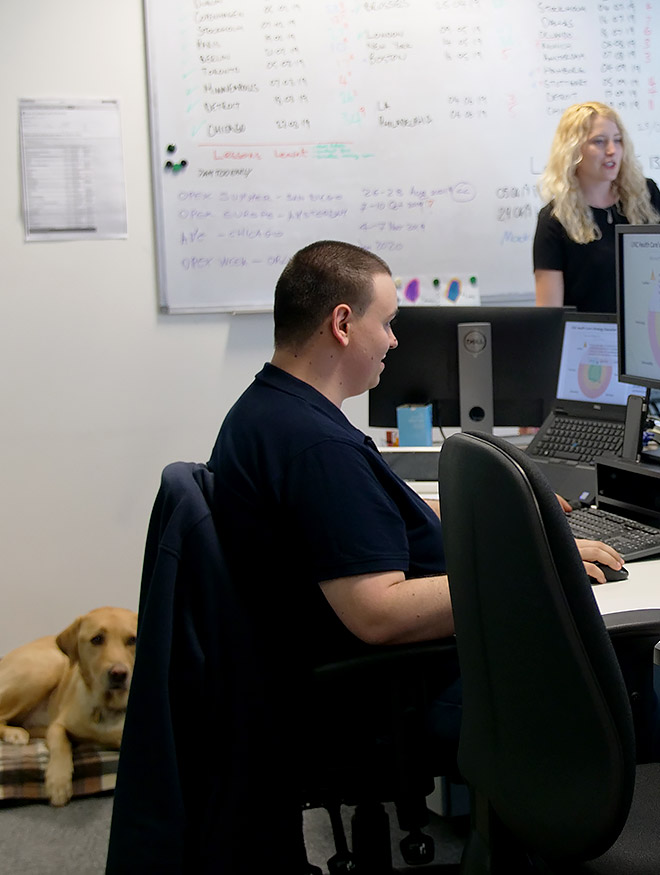 Why diversity is important in the workplace

I think everyone should be given a chance. People who are willing and driven, no matter who they are, should be considered if they’re capable and willing.

At my organisation, we have a really diverse team, and our culture has always been really good. Teams really integrate with each other. I look at the different people in our team and see that everyone is respected and valued in their job.

For me, when it comes to recruitment, it all comes down to – can you do the job well? As an employer, just being open-minded and seeing the potential in people is all it takes.

Jay talks about his experiences with cerebral palsy and how poetry has helped him to channel his emotions.