Lack of sleep can leave us emotionally fragile

Elara was born 8 weeks early. They found 2 intraventricular haemorrhages, 2 brain bleeds, which had occurred prior to her being born. We were basically told that one of the likely outcomes of that was some form of cerebral palsy was very likely, although they couldn’t confirm what type.

We very often refer to Elara as our little curve-ball, completely unexpected, well she wasn’t unexpected, but the challenges that she’s facing is something that neither one of us has had to deal with in our personal life. My wife has in her work life but, not an actual family member.

The sleep side of things we didn’t know if there was anything extra that we could do or anything that we should be doing in order to get her back off to sleep.

The start of sleep disturbance

To start off, Elara’s sleep patterns were quite normal, quite regular. She would wake up for a feed in the night or we would try to anticipate her feed. Up until she was 5 months, she was sleeping pretty much right the way through. But we had noticed that her right leg, especially, was starting to twitch and spasm when she was awake and when she was asleep

As she became more mobile, the twitching and the spasming sort of eased off during the day, but it continued through the night. It was getting to a point that it disturbed her sleep. It could be any number of times throughout the night. Sometimes not at all. On rare occasions she’ll sleep right the way through

Elara developed an issue with her sleep, because disturbance has been going on for so long. When it first started, it was just a little, and then it escalated. We found that even on the nights where she was sleeping quite well, and she was quite settled, she was still waking up, because she had got into this pattern of waking up in the night for whatever reason. 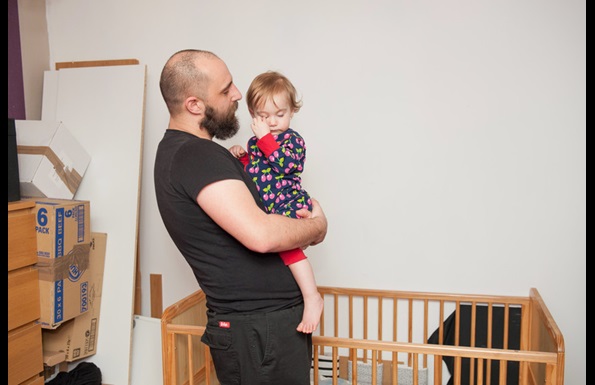 We tried different methods to settle her back to sleep. We started settling her in our bed and popping her back into the cot. We tried leaving her, tried all the usual bits and pieces.

With her being number 5, it’s not our first rodeo. We’re fairly confident we know how to get a baby to sleep through the night. With Elara’s additional challenges, we wanted to double check to see if there was anything else we should have be doing, and make sure we were doing everything right as far as getting her to sleep was concerned.

My wife started looking at what advice was out there, what was available. Our health visitor suggested the Scope sleep service clinic at our local Sure Start centre. Ultimately it was a case of ‘why not?’ We were confident we were doing everything correctly, but if there was something we were missing, potentially a pair of much fresher eyes would benefit us to have a look. We needed more of that reassurance.

We’re quite lucky, on the day that my wife called, the clinic was on, and they had a space. My wife was able to pop down with Elara and spend some time with a sleep adviser. They went through our evening routine, what we should do to get her off to sleep and how we should react and get her settled back down when she does wake up.

The lack of sleep we get can leave us quite emotionally fragile. We’ve had snide little comments at each other when we’ve actually done nothing to upset the other one, but it just happens. It’s what happens to people when they don’t get as much sleep as they should.

We were given a few suggestions - a warm bath before bed, have some quiet time, sit with Elara before she goes up to bed and things like that. Ultimately with that night time routine, she does tend to settle quite easily.

What will happen now is we’ll lay her back down and give her a dummy. She’s got a little small fleecy blanket we call her Taggy. She has that and she cuddles up to it and cries to go to sleep, but it’s trying to get comfortable and getting over that, whatever it is that’s causing her to wake up, that’s causing the issue. It could be anywhere up to 8 times a night, but on average, it’s about 3 or 4.

All babies at that age, I suppose, they go to bed, they don’t want to go to bed, they want to play, so we get the occasional shouting and crying. We go back and give her a dummy, lay her back down and straight back out. She’s asleep fairly sharpish. 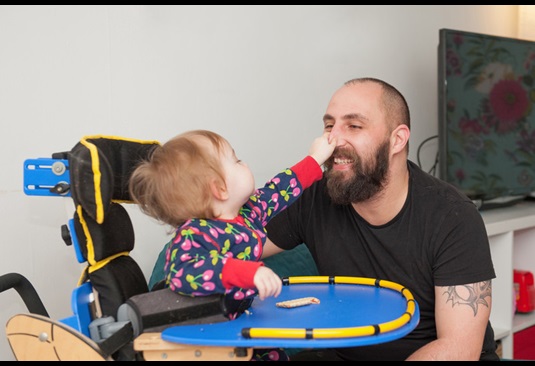 The Scope sleep service reassured us that if we needed any more support, if we needed anything else going forwards, that they were there for us to lean on if needed. We understand that yes, we’re doing the right things, we’re on the right page, and we need to keep doing what we’re doing to support the sleep Elara is having, making sure she gets sufficient sleep, and to continue to support the routine.

We’re actually very lucky to have such a bright, intelligent little girl who we could very easily have lost. Knowing that support is there for us and for other families, whether it’s the Sleep Service, or whether it’s the other services Scope provides, is just one of those things that’s so invaluable, especially when like we were, you’re at your wits’ end. We needed that nod and that wink to say "Yes, you’re doing what you can do, don’t worry and carry on as you are, and we’re here to support you if needed".

Scope have lots of advice on sleep and you can use their website to find out more about their sleep services.

Elara likes climbing and loves toy boxes. She’s very chatty. She likes playing Fetch with her sister, one of the new games that they’ve developed. She’ll throw something and say ‘Fetch’ and then pant like a dog, but it’s Seren that has to go and fetch it.

Because she’s the youngest in quite a large family she loves getting involved with everyone and having that interaction. Elara’s ridiculously intelligent too, like Seren.

Seren is definitely the brightest of the bunch so far, but Elara’s certainly taking after her in that respect so, watch out if the pair of them ever team up!